Showing posts from January, 2011
Show all

One of the findings of the recent trip to Salzburg (did I mention that ?) was a project which was connected with one my colleagues on the trip... It's a documentary called Silent Snow (referencing the classic 'Silent Spring') and looks at the spread of toxic chemicals into the communities of circum-polar lands, and other locations, despite the chemicals being banned many years ago. This is affecting their health. DDT is banned in many countries, but is still being used in Africa. SILENT SNOW The website has a link to a trailer for the film. The Silent Snow project The Silent Snow project aims to raise awareness of this problem and consists of both a short and a feature length documentary by  Jan van den Berg , educational material for schools and this website. In the short film the subject is introduced by following two young girls in Greenland and the way in which they are confronted with the pollution of their environment. In the feature length documentary a y
Post a Comment
Read more

January 24, 2011
As a preview to the forthcoming posts about my recent trip to Salzburg, please find below a Flickr slideshow of the first lot of images I have added to Flickr. More to come once I've had the chance to tidy a few of them up and choose my favourites. One of the highlights was the amazing Alpine panorama as the plane took off for the return to Stansted.... The cultural connection that most people think of is Mozart, but there is also 'The Sound of Music'....
Post a Comment
Read more

January 15, 2011
This is the 400th post on the Cultural Geography blog. It's gone well so far, with some good contacts made through the blog, and various books that have come my way to take a look at, notably the wonderful MAPPING books that were sent at the end of the year. I continue to be fascinated by the scope of Cultural Geography to develop students' understanding of places, and their relationship to them. If anyone has any ideas for where the next 400 posts should go, let me know. I'm going to be exploring the culture of Salzburg in Austria next week, so I'll let you know how that goes...
Post a Comment
Read more

Mission:Explore at the Outdoors Show

January 15, 2011
Here's Dan at the Outdoors Show at EXCEL on Thursday of this week.. He's talking about MISSION:EXPLORE .... Watch out for the TWO NEW Mission:Explore books coming out later in the year... If you'd like to partner with us , or find out more about having missions written in your area, or getting us into your school, get in touch !!
Post a Comment
Read more 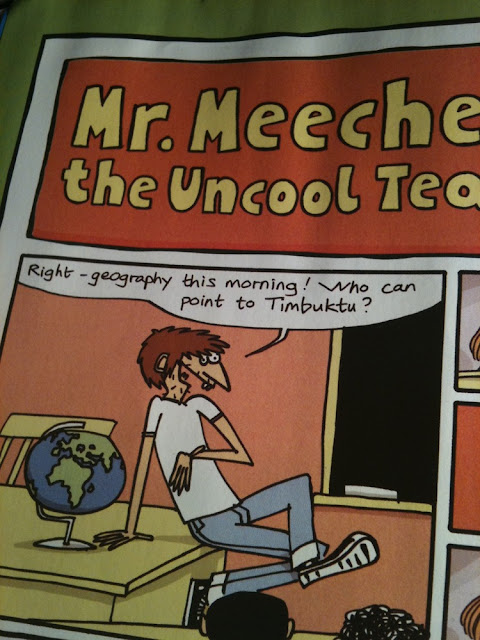 My son gets The Dandy every week. This week's issue of Mr. Meecher has him teaching a funny geography lesson...
Post a Comment
Read more 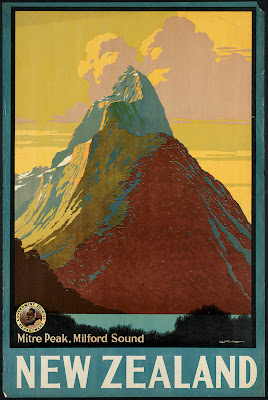 Thanks to @hoddergeography for the tip-off to an evocative set of images... BOSTON PUBLIC LIBRARY has a Flickr set of beautiful old travel posters... Here's a couple of examples, there are many more by following the link... Mitre Peak, New Zealand... I'll get here one day - as featured in my KS3 Toolkit book: "Look at it this Way".... I also really like this Joseph Binder image of Austria . Made even better by the fact that next week I fly out to Salzburg for 4 days to work on a European-wide GIS project. Images made available under Creative Commons license...
Post a Comment
Read more 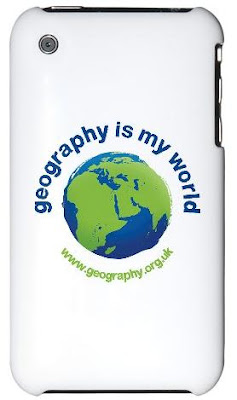 You deserve to get one of these for yourself, or your wife or husband or partner, or a friend, or as a prize....just buy one... Now available from the GA's online merchandise store... iPhone 3G / 3GS case, which has been given a GA makeover... Show your support for Geography and the GA wherever you go, and protect your iPhone at the same time.. Can't wait for mine to arrive :)
Post a Comment
Read more 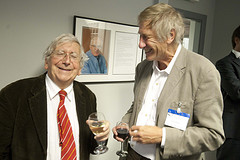 Earlier this week, one of the first e-mails to be received by GA staff after the Christmas break was the sad news that Dr Rex Walford, OBE & President of the GA in 1983-4 was missing after a boat accident in the Thames over the Christmas period. Rex was one of the most influential post-war geographers and few teachers will have been unaware of his work, or gone through their career without encountering his huge contribution to geography education. Image copyright Bryan Ledgard - Rex and Fred Martin at the official opening of Solly Street My first introduction was in the form of the idea of Games in Geography, guided by my PGCE tutor, the late Vincent Tidswell. As a gamer myself, I enjoyed developing some of my own variations on Rex's ideas, and remember the contributions that Rex made to Teaching Geography. I met Rex numerous times as he visited Cambridge University PGCE colleagues who had their placement in my school through the 1990s. More recently, we met again at Ma
1 comment
Read more 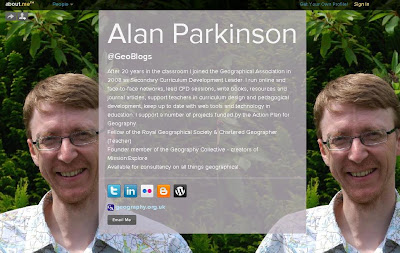 A new place to direct people to: your own online profile page . A useful online 'business card'... Here's my ABOUT ME PAGE
Post a Comment
Read more 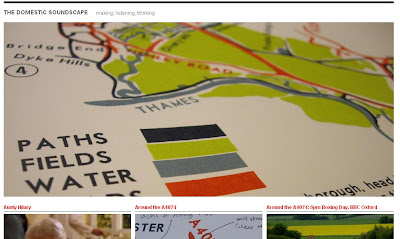 Thanks to Joe Moran for the tip-off to this intriguing project by Felicity 'Felix' Ford . First of all a blog called ' The Domestic Soundscape ' Secondly, a radio programme on a road that she uses each day, which you can catch on LISTEN AGAIN if you're quick.... The A4074... Some intriguing stuff to start the new year... Great 'psychogeography'...
Post a Comment
Read more 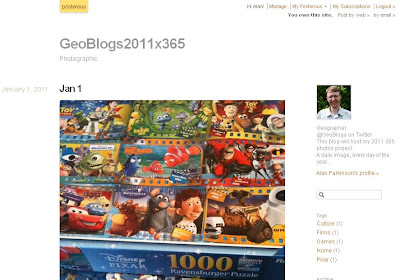 I've followed quite a few of these projects. The idea is that you post something each day for a whole year. I've never done one before, mostly because I forget to start one on the 1st of January, and then decide to wait until the next time round. This year I remembered... Different people post different things: images, videos, song lyrics, poems, quotations... you can basically add what you want. I'm going to use POSTEROUS for my 365 as I can post to it from my iPhone using the POSTEROUS app, but also have the option to e-mail posts to the blog as well. Never used it for more than the odd blog post either... Visit the 2011x365 BLOG HERE , and feel free to subscribe...
Post a Comment
Read more
More posts