Showing posts from December, 2015
Show all

A Christmas song for you...

Out to the cinema last weekend to see the latest Pixar movie: The Good Dinosaur. One thing which hit you straight away from the opening scenes, was the amazing animation of the landscape , and the part that the landscape and in particular the river , and flash flooding has in the story. Details of the way that the film makers researched the landscape and how to portrait can be seen in this  article: From Pixar Post Apparently the USGS were also involved in ensuring the accuracy of the landscape and the way that it was portrayed. I enjoyed the movie. Before the main feature, there was another short film called 'Sanjay's Super Team', which was an excellent comment on cultural globalisation. Next film on the list, booked for over Christmas period is the new 'Star Wars'.... Wyoming is hoping to cash in by making the most of its link with 'The Good Dinosaur', and the Grand Tetons area in particular. More on this to come over on my Geography and
Post a Comment
Read more

A year in (streamed) music 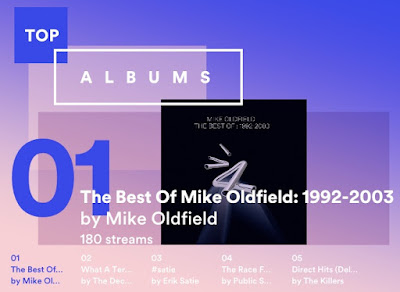 Spotify has been allowing users to see the results of their year of streaming, and released the data on usage. My son and daughter use my Spotify too, but not to the same degree as I do. Here are a few of the results of the Year in Music feature... That's a lot of time spent at my iMac writing and listening to music...
Post a Comment
Read more