Showing posts from March, 2021
Show all

Scotland and Music and Sense of Place

"Try and find those things that make us Scottish. They are not necessarily Tartan, but are no less colourful. They are in the sound of the kick drum, the bass line, the distortion, the punk guitar, the break-beat. Try and see the old ways in new surroundings. The folk tune of long ago can be heard above the constant traffic of urban life: hear it in the roughness of the fiddle, hear it in the sweetness of the chanter. They are just as valid now as any of our technology, nae, they are more valid than any of it. Hardland calls from the depths of a hard-beat urban underground, but it does so through the heart and beauty of a high land." Martyn Bennett
Post a Comment
Read more

I've just finished watching the 10 episodes of 'The Terror'. It's a gothic horror style series, which is based on the expedition involving two ships: the 'Erebus' and 'Terror' to find the NW Passage. This much is factual, as is the disappearance of the men and their ships. Three were found buried on Beechey Island, and the two ships have also recently been discovered, with 'Erebus' also being the subject of a book written by Michael Palin. The trailer is here. It's worth watching. It's a little overlong and could have been slimmed back a lot. It's very dark in terms of not seeing what's going on very clearly at times, but also quite gory and unsettling. There are some terrific performances, particularly from Jared Harris, Paul Ready and Adam Nagaitis. The scenery is a little polystyrene at times rather than ice, but there are some excellent scenes, including a carnival on the ice, and some later scenes in the fog... the creature s
Post a Comment
Read more

A Pixar Sparks short which was shared recently by Ben King. It has themes of migration , and the sacrifices of one generation to help the next generation to succeed. One can read other meanings into this, and there are quite a few reviews and comments already on the various feeds where it has been shared. It is also being shared because of the representation of Asian characters and cultural references which means that it would be suitable for those wanting to discuss decolonising the curriculum, something which I have created a range of blogs about, and will continue to do so as part of the process of educating myself, along with the work being done by and within the GA to reexamine previous work and approaches. In the meantime, enjoy the film... I will be showing this as part of my summer term planning to rejig quite a few things.  I'm alway tinkering and keen to insert new ideas.
Post a Comment
Read more 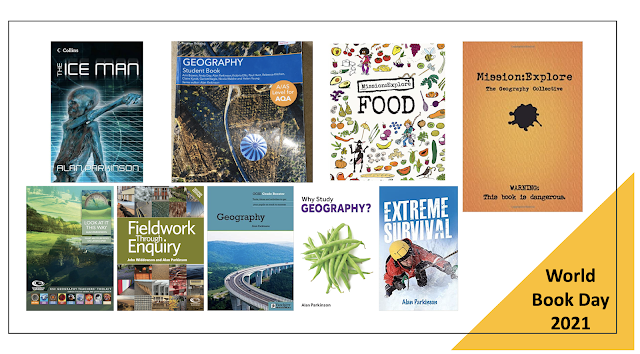 But of course... these are some of the books you could be reading today :)
Post a Comment
Read more
More posts