Stephen Fry is following me...

October 10, 2008
...mind you, I'm also following him.
I know, for example, that today, he set off for a trip to Africa, and that he spent this morning drinking coffee and packing.
How do I know that ?

If you're already online, a quick TWEET is very easy to do.

Tom Barrett, an avid user, and someone who I met at TEACHMEET08 has posted on the VALUE OF USING TWITTER, and there are lots of similar blog posts.

The COMMONCRAFT SHOW FOLK have produced this rather good YOU TUBE video:


It's also FREE of course ("my favourite price")

So what else could persuade you that this might be worth your valuable time ?
Well, Barack Obama is on Twitter... 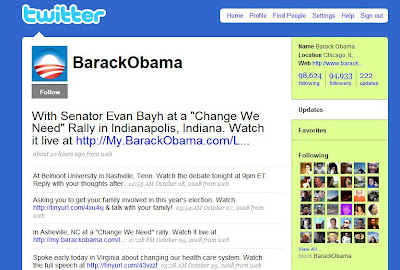 and BBC Education team are on there.... 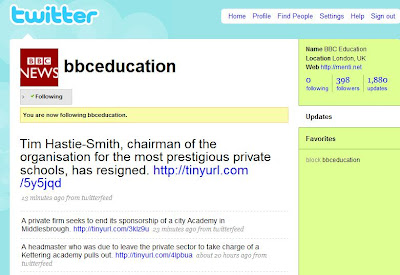 Also check out TWITTERVISION: a 'mash-up' which displays TWITTER posts on a world map - compulsive for trivia lovers - can't guarantee that it'll all be 'suitable for work' as they say...
Twitter