Showing posts from April, 2009
Show all

Encounters at the Cornerhouse in Manchester

Image of Cornerhouse by Flickr user destinyuk* under Creative Commons license - many thanks !

Later this week, Encounters at the End of the World: the latest film by Werner Herzog is released. It was nominated for an Oscar earlier this year.
The Manchester Cornerhouse would like to invite you and your students to a one-off event organised in collaboration with Revolver Entertainment and The Geographical Association. We are pleased to present a full screening of Werner Herzog’s 2007 film Encounters at the End of the World (Certificate U) for students and teachers of GCSE, AS and A2 level Geography on Thursday 7 May at 11.00am. There will be 158 places available at a cost of £5 per student.
In his latest documentary, legendary filmmaker Werner Herzog turns his lens to the quirky inhabitants of the remote Antarctic community, McMurdo Station. Encounters at the End of the World is a visually stunning exploration of human interaction with mother-nature.
To accompany the screening, Alan Parkins…
Post a Comment
Read more 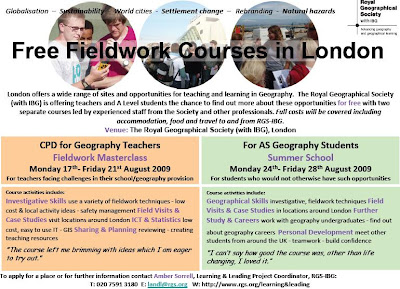 An opportunity for students and teachers alike...
The Royal Geographical Society (with IBG) is providing fully funded opportunities for AS geography students and for geography teachers through our Learning and Leading programme.

They are offering fully funded places on two separate residential courses, based at the RGS-IBG in London led by experienced staff from the Society and other professionals. Full costs will be covered including accommodation, food and travel to and from RGS-IBG:

Teacher Fieldwork Masterclass: Monday 17th - Friday 21st August 2009
Teachers will visit a wide range of sites in London which provide opportunities for teaching and learning in geography – topics include the Olympics and sustainability. The course will cover a variety of fieldwork techniques, ideas for low cost and local fieldwork and safety management and ideas for easy to use ICT and GIS. There will be opportunities to share ex…
Post a Comment
Read more 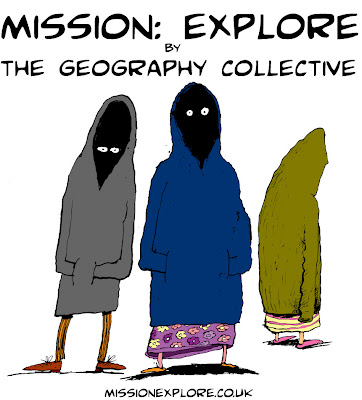 New on Twitter are the Geography Collective at Mission Explore....The book is now in pre-production... Watch for more exciting multi-media Exploring ness from the Collective. Visit the blog for some sample missions, including some BRAND NEW ONES !!
"Great news for the young, and the young at heart" Iain Hallahan

The first copies of the GA's manifesto: 'a different view' have been arriving in schools this week, after the official launch last week at the Annual Conference.
This is a document that is intended to provoke debate about school geography.

A different view re-affirms geography’s place in the curriculum. It makes a forward looking and compelling case for geography in education. It re-states the value of free-thinking, specialist secondary teachers who are passionate and engaged with the discipline and its potential to educate.

A different view is a two-year programme, delivering a wide range of materials to support geography teaching and touching every school in the UK. It is based around eight stunning visual ‘doorways’ and seven themes which cover the GA’s core beliefs and priorities.

Visit the new dedicated area of the GA's WEBSITE, download and use the lesson ideas, explore the links, and let us know how you use the document. 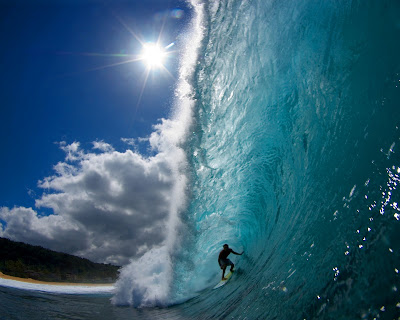 'a different view' is the Geographical Association's manifesto for school geography. It will be launched at the GA's CONFERENCE on the 17th of April (don't forget the Twitter hashtag #geoassoc09) where we are expecting over 700 delegates.
Come and say hello if you see me...
Part of the launch package is a movie that I made using ANIMOTO
An important aspect of the movie, alongside the striking images, and carefully worded captions, was the music, which had to be suitably engaging to accompany the images and text captions for around 5 minutes for the 'full version' of the movie (with shorter versions clocking in at just under 3 minutes)
Real World records was started by Peter Gabriel in 1989. I've been a fan of his since late 1970's when he left Genesis, and have a rather old Real World fleece (the name was irresistible for the geographer in me...)
What's great is that you can also search for ARTISTS on a 'real' world map on the Real World web…
Post a Comment
Read more

David Rayner has been busy again, and has produced a very useful new VIDEO 'CHANNEL' called GeoTube, which is hosted on a site called FLIGGO.This is not banned in schools (well, not yet anyway) It has a collection of useful videos, and this will grow over time.
3 comments
Read more
More posts