August 17, 2007
Tony Cassidy has given me an idea for an exercise which we will use later this year, but which I will also encourage members of staff (and any other visitors to the site) to complete as well before we get started. Here's a slide which gives Tony's 'cultural icons' of his teenage years, which were 1987-1997... 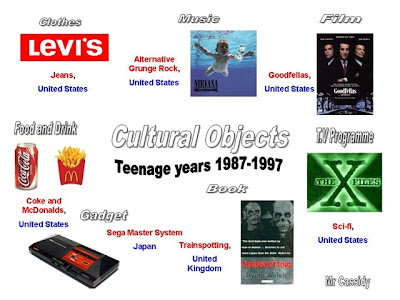 I'd like you to answer these questions.
a) When were you a teenager ? (give the years)
b) Choose one 'cultural object' from the following list of headings which defined your teenage years the most: (you don't need to give reasons, but be prepared to be able to if challenged...)

d) Do they tell us anything about the countries shaping culture in that period ? Why might this be?

I'll post mine later tonight if I get the chance (tomorrow if not) for comparison.
Cultural objects Teenagers