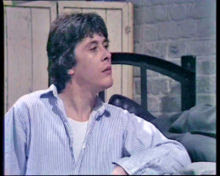 When I was trying to decide the TV programme that summed up my teenage years (see earlier post), one of the programmes I thought about was the classic "Porridge".

Just watching an episode on UKTV Gold (waiting for the Simpsons to start - more on those later in the year !), and Godber, Fletch's cellmate is just about to be released, and he apparently has
"his one 'O' Level in Geography"
Fletch says "Geography ? I bet he'll get lost as soon as he gets outside the prison gates he will..."
Porridge