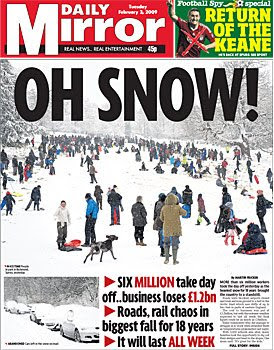 "We're very lucky in the band in that we have two visionaries, David and Nigel, they're like poets, like Shelley and Byron. They're two distinct types of visionaries, it's like fire and ice, basically. I feel my role in the band is to be somewhere in the middle of that, kind of like lukewarm water."
Derek Smalls in 'This is Spinal Tap'

Today, as with yesterday is a 'snow' / 'duvet' day across many parts of the country. The BBC NEWS reported the traffic problems in and around the country. They didn't mention that much about other parts outside of the capital, mostly London yesterday, but anyway. The snow has now moved North, and the chaos continues.

At lunchtime yesterday it was out to collect my kids from their primary school, which has closed early due to the weather forecast being a worsening situation. This morning was an interesting slippy walk, but they were safely delivered.
Today, the newspapers have some very creative headlines and stories, and there have been some interesting journeys to work by a lot of colleagues.
For the first time, the ice and snow has prevented me getting up to Sheffield.
Instead, I'm working through a range of projects the deadlines for which seem to have piled up this week.
One additional resource that I have been putting together is for some UEA PGCE colleagues.

Meanwhile, over in Australia, there is a record breaking HEATWAVE which has led to parts of daily life grinding to a halt.

Back to the snow finally, The Register: the satirical website had a funny report, although it has a rude word, so you can find it yourself if you want the full version.

There was also a good map on the GOOGLE MAPS MANIA website, which was related to TWITTER, and is mentioned in this BBC NEWS REPORT.
A #uksnow map...
Worth collecting the various impressions of the impact of the snow.
One ironic one was that the cost to the British economy was apparently over £1 billion, which is of course small change these days....
The Daily Mirror had the best headline of the day !
Heatwave Snow