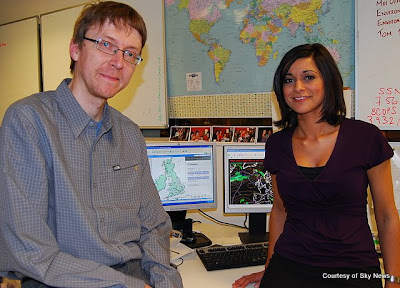 Had a very pleasant day yesterday. Got the early train down to London, with my Vodafone dongle keeping me in touch with all things geographical. Across to Waterloo, a West Norfolk Cornish Pasty (not happy that they've changed the recipe on the vegetable pasties though - it's all tomato now !) Down through Clapham Junction ("Britain's busiest railway station" apparently) and past Kew Gardens, and out at Syon Lane.
Walked into an anonymous industrial estate, and there were the cluster of buildings that make up Sky News and Sports, and the various other broadcasting channels that are produced in the buildings. Security was very tight.
I was there to meet up with Lucy Verasamy: a former pupil of mine, who is now part of the weather presenting team along with Francis Wilson, Isobel Lang et al...
It was a 'quiet' weather day, with the 3rd or 4th consecutive day of anticyclonic gloom, which meant that the visit was possible. News wise, the Turkish airlines crash had happened that morning, so the news team were running with that story.
Had a long chat in the weather office. It was, I think, about 10 years since Lucy left school. She did a degree with Iain Stewart of "Power of the Planet" fame, and even back then was always determined to be a weather presenter. She was also very positive about the value of geography as a subject, and even thought that being a geography teacher might be an alternative career.
Had a tour of the SKY NEWS studio, which is surrounded by a walkway. There were a huge number of people involved in producing the various output: tv of course, Sky News radio, internet / websites and online video production, press and library
Martin Stanford was in the news room at the time, with his tablet pc. Also saw the Channel Five news room.
SKY NEWS has a FLICKR photostream.
Lucy also talked about the impact of the snow in London in February, and the very busy day she had, which started with a 4am journey to the studio. As she'd forecast the snow it would have looked bad if she hadn't made it in !
The WEATHER GIRLS on the SKY NEWS team also have their own BLOG which Lucy contributes posts to.
We talked about the place of weather and climate on the curriculum, and the tendency to focus on extreme weather events rather than attempting to teach the complexity of everyday forecasting...
The weather is very much part of the geography that students 'live' each day.
Hurray for weather...
Lucy Verasamy Sky News Sky Weather