January 08, 2008
I am indebted to Tony Cassidy who has sent a range of splendid resources that he produced over Christmas ready for this term. I'm looking forward to using them... 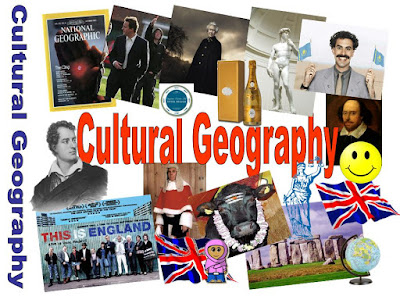 He also included a very nice image which shows the position of Cultural Geography (and the other strands of geography) in relation to the traditional view of the subject which people actually see sticking up above the water... 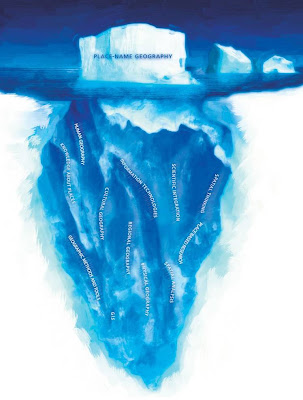 We looked at Culture in the classroom lesson this week.

Culture involves a range of activities and topics.
Here is a (non exhaustive) list of areas which we could have considered:

At the moment, there is a furore going on in India related to the cricket, which is very important to the Indian population. Think also of the films made in Bollywood, which have a particular structure that is very important.

Here is an extract from a very popular travel book about an American travelling through England. There is a famous quote by Irish writer George Bernard Shaw:

"England and America are two countries separated by a common language."

How true is that ? Can you think of some answers ?

"England was full of words I'd never heard before - streaky bacon, short back and sides, Belisha beacon, serviettes, high tea, ice-cream cornet. I didn't know how to pronounce 'scone' or 'pasty' or 'Towcester' or ''. I had never heard of Tesco's, Perthshire or Denbighshire, council houses, Morecambe and Wise, railway cuttings, bank holidays, seaside rock, milk floats, trunk calls, Scotch eggs, Morris Minors and Poppy Day. For all I knew, when a car had an L-plate on the back of it, it indicated that it was being driven by a leper."

Bill Bryson: “Notes from a ”