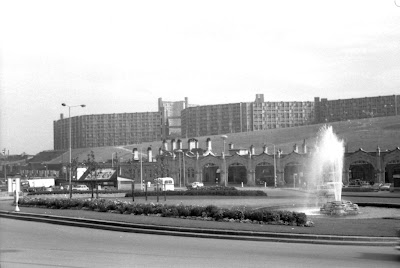 Why has this image developed ? 'Is' this the image you had ?

The development company URBAN SPLASH has some intriguing web resources.

Several of their developments would be a useful counterpoint to the more negative images that people might have...

I used to live in Huddersfield, and just up from the road in Newsome where I lived was an old textile mill with a huge chimney which was sat empty, but would perhaps now have been redeveloped.

Park Hill flats are an image I have seen regularly for the whole of my life: squatting on the hills on the approach to Sheffield. Have spent some time wandering and driving through them at intervals over the past few decades.

"Streets in the sky..." was the original plan.

Each apartment had a front door which looked out onto a twelve-feet wide access deck ('street'), which ran from one side of the scheme to the other. Bridges carried the street through the entire scheme, allowing milk floats to trundle from door to door.

Jack Lynn was worried that the lobby space in other Modernist estates tended to become a no-man's land, serving neither public needs nor offering privacy to residents, and it was hoped that the 'streets' would solve this problem. He remarked enthusiastically on the different colours of linoleum at each doorstep as proof that residents' individuality was not being smothered by gargantuan surroundings.

But Park Hill's problems quickly became apparent. The streets allowed some of the worst aspects of urban life to remain (muggers found they made convenient getaway routes), whilst failing to preserve the better aspects.

They were never really streets in the real sense. Although the architects had included shops, a school, and a pub in order to create a distinctive community within the estate, the access decks were really just long walkways with none of the vibrancy, diversity, and organic feel of a city street which has grown and changed over decades or even centuries.

In the Unité d'Habitation in Marseilles, Le Corbusier had enclosed his streets within the building: in Sheffield they were left open on one side, and exposed to the less clement Yorkshire climate.

The idea was that the milkfloat would float along the streets

Read the text in the Urban Splash brochure to get a nice feeling for the importance of Park Hill flats.

One of the best examples of a web resource which has the potential to be developed into the classroom is the website of Peter Jones, who lived in these flats.
His website, called 'STREETS IN THE SKY' is one that you must visit.

His story, which features his atmospheric photography and skilful line drawings can be viewed a the PARK HILL FLATS site. There are some rude words if that sort of thing offends you, but this is an absorbing read ! It has a lot of embedded geography.

Urban Splash are now redeveloping PARK HILL. You can download the brochure I mentioned above (PDF download)

A great little site with sound effects and chunky music too has been produced by URBAN SPLASH.

Another of Urban Splash's projects.

Also don't forget the classic Geography Programme about Glasgow which features Basil Spence's designs, and the couple who live in them...

There are plenty of HIGH RISE and TOWER BLOCK resources on the web.

I think this idea has a lot of legs, and will be developing a unit on this for my new KS3 SoW, and adapting it for use with the new GCSE and also KS5 specifications.
Rebranding Places springs to mind...

Keep an eye out for something on this at the GA Conference... Potentially...

To be continued...
High Rise