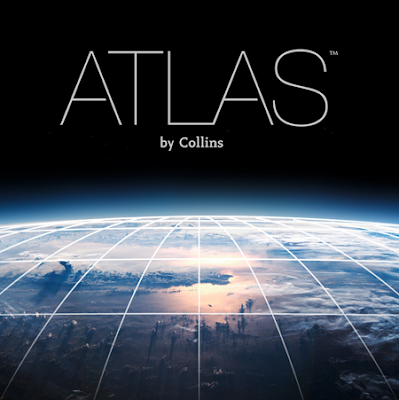 The Atlas by Collins is now available for download at a promotional price of £6.99
The app needs an iPhone 4 or above, and an iPad 2 or above (sadly my first generation iPad was unable to run the app)

This is a 'proper' app, by which I mean a lot of time and effort has gone into making it look and feel right on the devices it is designed for, as well as potentially replace a paper-based product. Collins are famous for producing the 'Times Atlas of the World' which is perhaps the definitive atlas, and so any new product has to retain that pedigree.
It's also a proper app in term of its size. You'll need over 600 Mb of space as well as processing power.

The app is designed to be used offline for maximum flexibility, but also has an option to go online and fetch further Google imagery if the user zooms-in past the maximum scale that the app already has pre-loaded. This makes it a useful resource to have on a library iPad for example, or as a suite/folder of apps for the Geography classroom.
A compass icon is used to identify specific locations - tapping information when this is located over a particular place brings up a range of detail for about 200 000 locations, which goes beyond what would be possible in a paper based product.

The seven thematic globes, which include Physical, Political and Satellite, will be added to in the future. Each globe has a range of layers which can be laid over the globe to visualise a data set e.g. population density or the location of a particular biome. Users can swipe between globes and layers to cross-reference data, or choose to display places according to particular indicators. This would enable enquiry tasks to be set up, although at present only one layer can be added at a time.

One major advantage is that amendments to the atlas - the world isn't a static place of course - can be added to future updates of the app. This is obviously something that would not be possible in a paper atlas, which can quickly go out of date. Geography matters.... Boundaries change.... New countries are created.

Display mirroring, or use of the Reflection app (which I have blogged about previously) would enable the atlas to be displayed, and to be used via an IWB or data projector. I actually found that the atlas was perhaps easier to use on the iPhone than on the iPad, although this is obviously a matter of personal preference. The globes certainly look impressive, floating in space and look as if they are sitting there waiting to be manipulated and used. They invite further exploration.
The navigation is intuitive and crisp, and a brief tutorial with labelled screenshots is available for first time users.

Check out this rather nice video which introduces the app...

The app is set to grow with further globes and functionality over time, so this is a resource with longevity built in. Further layers, perhaps with added granularity would be worthwhile, as would the ability to view more than one layer at a time and swipe between them.

There is also a range of supporting material on the website.

A range of How To videos shows the operation of the major features of the app. Some materials for education with ideas to support its introduction into the classroom would be useful perhaps. The app is designed for a range of users, but offers the potential to provide young learners with an atlas that they will enjoy exploring.

Disclaimer: as mentioned in a previous post, I have had a free evaluation copy of this app for the last month...
Atlas Atlas by Collins iPad iPhone