From earliest childhood, I remember the sound of the ice-cream van as it moved around the estate near Rotherham where I lived, stopping every few hundred yards. There were a number of tunes that were played, depending on the van.
One of my favourite stories, which I still tell, is a friend whose parents told him that when the music was playing it meant that they'd run out of ice-cream...

There was an interesting article in the Times last week about ice cream vans.
It was about the 'demise of the ice-cream van' and had the clever headline of 'The End of the Ice Age'.

This would make another useful exploration of cultural geographical change.
What's behind the decline in the number of ice cream vans on the streets ?
Is it competition from the supermarkets ?
Is it the changing demographics of communities, or the fact that fewer children play outdoors, and even notice the ice cream van coming past... (there are lots of regulations on how long and how often they can play their chimes...)


The article is behind the Times paywall...

In Mission:Explore Food we explored a range of foods - just been through it and found a mission which involves making ice cream - here's part of the relevant page.. 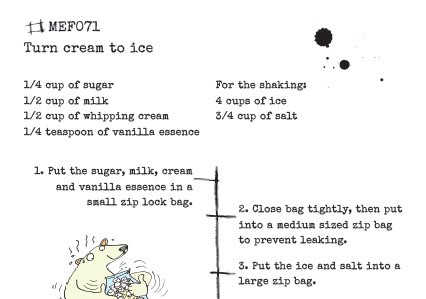 The actual book is out in early September, and is available to pre-order on Amazon...
An e-book version is already available too.

Finally, here's a wonderful pic of a lonely ice cream van on the beach at Whitby by Bryan Ledgard