September 23, 2008
This is a super idea, and one that I will definitely be featuring at SAGT in my seminar !
Imagine this as a homework activity for a group of students: find an album cover with an image which you can geo-locate, and explain the geographical significance of it too. OK, it will probably have to be a CD cover, but take a few LPs into school so that the students can say "wow, they're huge !" The images could be of buildings or a landforms: off the top of my head I can think of the cover of 'Tubular Bells' (but which beach was that ?), Dave Lee Roth's 'Skyscraper' with him on a vertical wall (but which one ?)

Time to get out the albums from my loft and see if I can geo-locate some of them.

Someone is already ahead of the game though. The WORD MAGAZINE ALBUM ATLAS is a great idea which has already got quite a large number of albums geo-located on GOOGLE MAPS. Here's an example from David Hepworth (THE David Hepworth ?) of the Pink Floyd album "A Momentary Lapse of Reason", the cover of which featured a load of beds on a beach, but which beach ?

One album that I knew I could find fairly easily was The Stranglers' album: "Norfolk Coast", the cover of which was shot on Hunstanton beach, 4 miles from home. 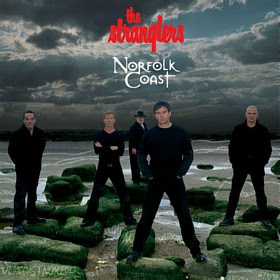 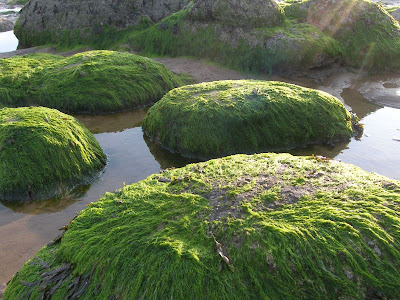 Here's an image I took during the Summer of the seaweed covered rocks the band stands on.

And here is the album: added to the ATLAS...
Why not add your own and get your students to add one of theirs.
Back up into the loft for more LPs....
SAGT 2008 Word Album Cover Atlas

Kenny O'Donnell said…
I love stuff like this. A good example of this kind of cover art is Teenage Fanclub's 'Songs from Northern Britain', all shot in the Cairngorms, and more than worth a listen...I have to confess to now and again trying to get song titles into blog post titles too, which is more than a little sad, I know :-)
September 25, 2008 at 9:20 PM