March 24, 2013
I'm always impressed by writers who are able to conjure up entire worlds and sustain a mood, mythology and history for their creation. Some of my favourite books depend on entering a world that the author has created. There's also a certain geographical element to this of course.
Authors need to become experts in the meteorology, geology, biology and pedology of their creation and they need to make sense. Settlements, transport routes, resources or inequalities - all of these are conjured up. Tolkien's Middle Earth or Jack Vance's Lyonesse are worlds I spent hundreds of hours in when I was younger.
If students are to be able to develop an extended piece of writing, or immerse themselves in a particular milieu this tends to lead to independent learning - they want to learn more in order to develop their enjoyment of the experience.
My son is very interested in Minecraft, and this has led him to research and uncover a range of videos which show how to carry out particular tasks, craft particular objects and combine particular processes to develop. 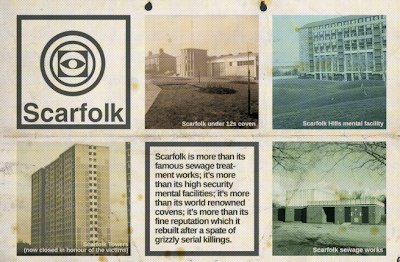 All of this is quite a  long lead in to a recent discovery of mine via Theo Keuchel.
It's a website which describes the daily goings-on in the mythical NW town of SCARFOLK.

It's a hybrid of 1970s nostalgia which has been subtly warped and twisted... There's some real skill at work to edit familiar graphics such as tape cassette inserts (OK, familiar to those aged over 20...) and twist them into a dystopian vision in beige and brown... I wonder whether they need a geography teacher for the local school ?

I think I may try to create my own warped milieu... although some would say that I've been doing that anyway for some time...
Sleep well...
Scarfolk