The conference will be held at the University of Derby, which is my favourite of the three venues. It runs from the 4th to the 6th of April.

The first day of the conference doesn't involve any of the usual workshops.
I will be heading over to the Association at Work session to grab a bite to eat, and chat to Ian Cook (who features in this month's 'Geographical' magazine coincidentally) to talk about a Follow the Things project I'm doing between now and the end of June.

Later that afternoon, it's the public lecture from Ellen MacArthur, followed by the GA Awards. I know that something I worked on has won an award, and there may be a few more in the offing too...
Then it's the wine reception, followed by a few drinks with esteemed geographer colleagues...

Friday is the main day of the conference, with sessions from early in the morning to late in the evening. My draft schedule is as follows:


9am
Lecture 2
Oceans for the Geography Classroom from Jamie Buchanan Dunlop. I've worked with Jamie on three different projects this year for Digital Explorer.

10
Workshop 6
Ian Cook – Follow the Things
A controversial choice as this clashes with Bob Digby's Presidential Lecture, but I'll be going along to get ideas and pointers for the work I'm doing with Ian. I'm sure there'll be a big turn out for Bob's lecture so I won't be missed...

11.45
Workshop 11 – SPC
I'll be going along to support SPC colleagues in their workshop.

Lunch, and a chance to network with colleagues. I'll also spend some time on the Discover the World stand to share ideas on the mission booklet which we've put together with them.

1.50
Lecture 7
David Lambert
My old boss talking about the thorny subject of progression in Geography - what's not to like.

2.55
Workshop 20
APPening Geography
I'm up on this one. Katy Shipman and I will talk about apps, and their use in geography. We'll ask people about their favourite apps, and explore how they can support learning.

4.30
Workshop 26
I'm up on this one as well.. going to be a busy couple of hours !
Two Hundred Heads are better than one
I'm going to act as master of ceremonies, and introduce two sessions by Tony Cassidy and John Sayers. They are both on the theme of collaborative work, and the importance of sharing.

5.35
Lecture 13
Urban Vignettes - Emma Rawlings-Smith and other colleagues who are involved in setting up a website with writing on urban areas. I'm hoping I can get across in time to join this one.

SPC Meal - down into Derby Centre for a pizza and a chat with colleagues...

GeoBeerMeet - over to the Brunswick Inn near the railway station for a gathering of teachers and some fine ale... 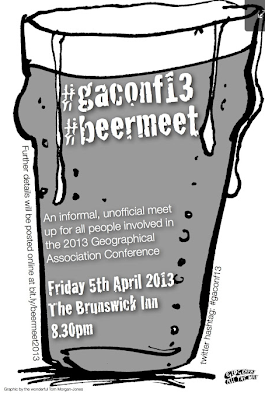 After the GeoBeerMeet I shall sleep soundly, knowing that my major contributions to the event have been concluded.

The second main day of the conference is on Saturday.

9am
Lecture 13
Digital Earth - a lecture by Karl Donert, related to an EU project which I am involved in, and which has taken me to various European locations... which is nice :)

10.10
Keynote – the changing Arctic
Terry Callaghan lecture - an important element of the conference is the chance to develop knowledge and skills in new areas. This is an area that I've been focussing on with some reading, and will develop further for some writing I'm planning in 2013 and beyond.

11.45
Mission Explore fieldtrip - a quick trip out, with a trial of some of the missions in the book

1.50
Forum
Bringing knowledge back in
A range of contributors from the various UK nations...

If you're going along to the conference, come and say hello.
GA Conference 2013