November 23, 2011
Visited the Olympics Park earlier for a meeting in the area about a forthcoming project....

Thanks to Bob Digby for the maps and other information on the park that he kindly provided in advance. It was my first view of the Olympics Stadium, although we didn't have time to walk round as far as the View Tube to get a better view... 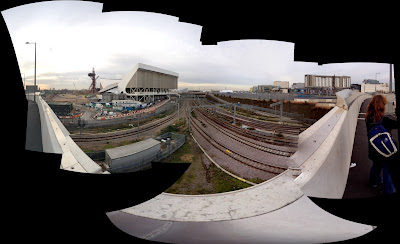 Interestingly enough there were quite a few Olympics related things in my Twitter stream over the last few days.
A nice image from @mrjmutton who was at the Olympics Park yesterday - looking a bit grey then - a lot brighter today. A set of Google Sketch-Up models of Olympics buildings, thanks to Keir Clarke.

Next came an article in the Daily Mail on the security costs of the games - because the venues have been finished early there's now more to look after, especially given the possible terrorist threat. This is apparently costing £250 000 a day.

And then via @The_GA came a link to a Daily Telegraph article which looks at the way that shops in the area around the Olympics park are looking to cash in on the games. The giant new Westfield shopping centre: apparently the biggest in Europe, was certainly busy today.

After that there was the story about the new uniforms for the people who are going to be helping people. Each of the volunteers and other people will be getting a range of clothing and other items to wear during the games: apparently they will be swamping the city.

My question on that was to wonder where these uniforms were made. Did their manufacture support the British clothing industry ?

And finally there's the Playfair website, with its game, which is about having a sweat-free Olympics, and would be worth a look. 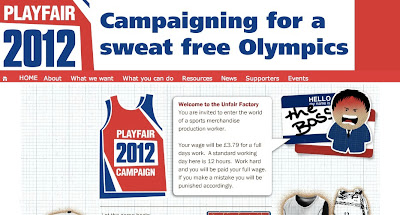 Photosynth: Alan Parkinson - will upload it to the Photosynth website when I get a moment....