Psychogeography at the BBC

July 25, 2008
On the hottest day of the year so far, I caught a train down (bargain thanks to my Network card) to King's Cross, and wandered along Euston Road to the BBC Broadcasting House. Had my usual West Cornwall Cornish pasty (wholemeal vegetable), and a swift half in a classic London corner pub. Over to queue and go through security, and met up with some geography chums. Once inside, it was deliciously cool with the air conditioning kicking in. 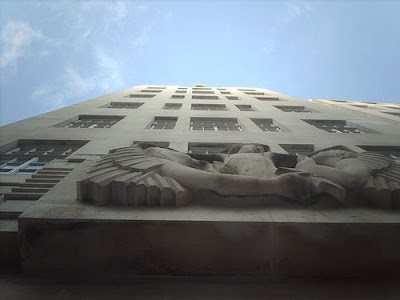 3 people on the panel:

Will Self: author of 'Psychogeography' (blogged about that before) and 'Book of Dave'

Some notes from the session - lasted about 80 minutes, which has to be edited down to around 30 minutes...
Interesting connections to the idea of Learning outside the Classroom, and the issues with taking students into urban areas.

The programme will apparently be broadcast on the 27th of August - I hope I've given enough of a trail for you to perhaps join the million other people who hear the show in whatever format suits you. Some interesting ideas to develop further - would there be interest in a CPD unit for geography teachers on Psychogeography and alternative explorations of cities ?

Out into the heat, and back to King's Cross for a sweaty train ride home and proofread my manuscript and made a 'to do' list, followed by a barbeque and cricket game at a friend's house...
Doreen Massey Psychogeography Radio 4 Thinking Allowed Will Self