A lovely short film on Disney+ features the director Enrico Casarosa and colleagues from Pixar talking about how they immersed themselves in the villages of the Cinque Terre near Genoa while building the landscapes within which the action of Luca takes place, the hillside village and tower, the small islands and the waters of the bay. Pixar have always sent their animators to do detailed research to ensure that the textures and lighting is as accurate as possible, and then build their own versions which are full of the little details which only being there in person and capturing smells, textures, feeling and sounds of the villages, including the way that the buildings create shadows at certain times of day... It all builds into the final aesthetic of the film. 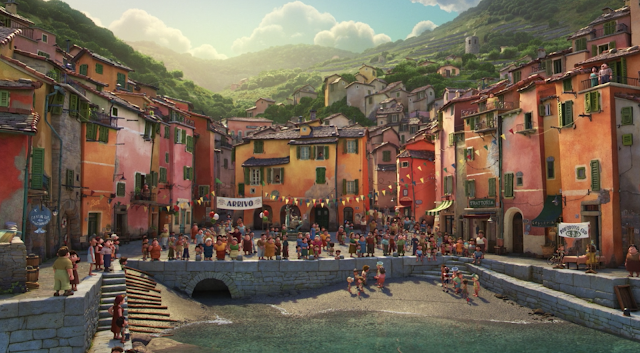 Warning: Possible Spoiler Alerts in the reviews that follow.

If you have seen the film you will have immediately appreciated the way that it captures the sense of place of the Italian locations. There are lots of little details, such as film posters on the walls and the washing hanging out of windows in the coastal villages. Even the plume of bubbles when someone jumps into the water and the way it lingers was based on research.

This Slant Magazine piece explores its sense of place. It describes the film as luminous.

It has an interview with the Production Director

Our movie setting is an amalgam of that beautiful era, the ‘50s, ‘60s, but it's also a fictional town. And I have to tell you, after four years of building this town of Pontorosso, which is almost like the best parts of every one of the five real towns, I sometimes feel like this is a real place. Myself and our art director Don Shank, we’re like, that's a real street, this is a real piazza—but they’re all combinations of real places.
Cinque Terre Film locations Films Geography in Film Italy Pixar