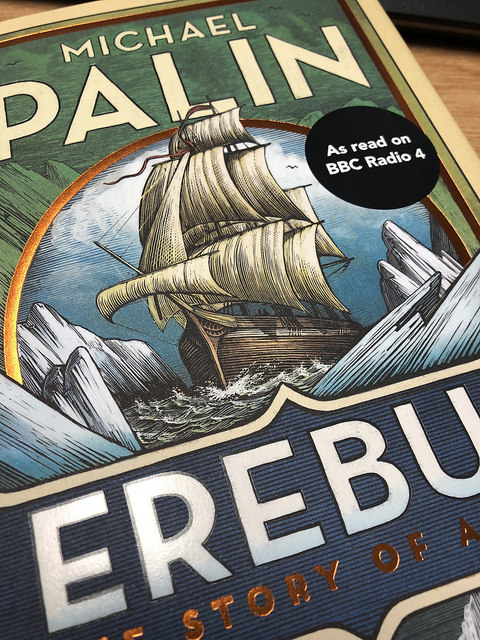 It was down to the Royal Geographical Society on Thursday this week to see Michael Palin launch his new book, which tells the story of the HMS Erebus. It was a sell out event, and all there received a signed copy of the book. HMS Erebus had a varied career. I knew quite a lot about the ship already from my reading of Polar exploration, with the tales of James Clark Ross, Barrow, Franklin et al very much on my shelves.
The Erebus made some of the earliest and most successful Antarctic voyages, and found the Ross Ice Shelf, and a volcano (named after the ship)
It then made its way north, as one of the ships used by Franklin as he attempted to find the North West Passage. He told the story of the discovery of the ships, and the work of Owen Beattie, which I'm also familiar with from my reading, and previous news reports.

I was particularly taken by the fact that Michael Palin was able to visit Beechey Island, where three of the crew of 'Erebus' were discovered. This is a place that I would love to visit, along with neighbouring islands which were visited by Barry Lopez in his books.

Michael also showed images of Erebus taken by divers, and told the story of the discovery of 'Terror' too. It was good to see a packed Ondaatje theatre with around 700 people captivated by the story, and the speaker...
A late trip back home, but fortunately unaffected by the strong winds. En route, I read the first 80 pages of the book, and it's excellent.
Erebus Michael Palin Polar regions