December 11, 2016
A few weeks ago, partly coinciding with Practical Pedagogies (see recent posts), I came across a really nice idea using emojis.
For a while, we've had an emoji sheet by the classroom door where students can choose a quick feedback on what they felt about the lesson that had just finished.
This post used the emojis as a resource and a stimulus for discussion during a lesson, and reflection on themes, by providing a symbol with several meanings - a simple semiotic stimulus...

It was the work of Jonathan Taylor, who tweets at


There are plenty of posts on the twitter feed, and quite a few teachers seem to have been using the idea following Jonathan's session at Practical Pedagogies.

I created a bespoke set of emojis to related to the work we are doing on the Nepal Earthquake. This goes alongside the resource that I wrote for the British Red Cross, which has been well received by lots of people.

I decided to try it with this context, and came across this website where you are presented with a list of emojis and selecting a particular symbols adds it to a tweet box, which can then be sent, and therefore screenshotted... 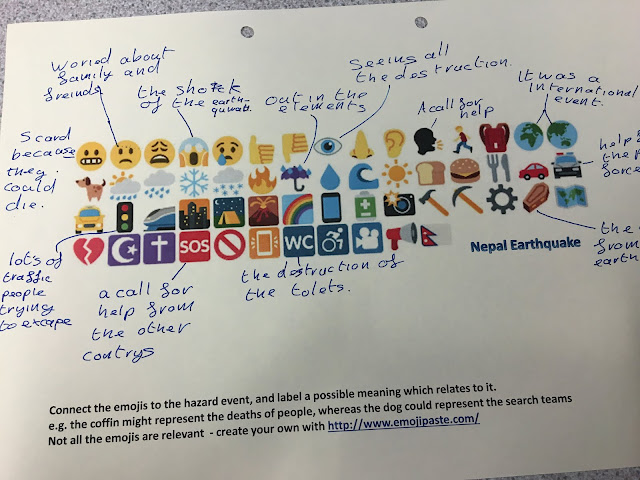 There's also the Emoji Copy website or Get Emoji, which allows you to build up a list by copying and pasting the icons into a box once again...

A few colleagues then tried the idea having seen it on my twitter feed, and had the idea of perhaps building up a 'library' of emoji boards for use in Geography.
And I came up with the name of 'emojiography' for this sort of activity....