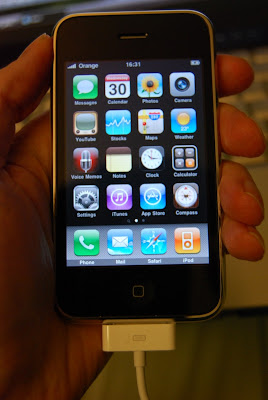 Image by Alan Parkinson
For those who haven't heard (or are even remotely interested) I finally decided just after Christmas that what I really needed in my life was an iPhone. I opted for a 16Gb 3GS version in glossy white.
There are many reasons why I finally succumbed to the ever-so-shiny phone.
One of my thoughts was that I had seen geography colleagues using it in interesting ways in the classroom, and outside the classroom (the latter perhaps more than the former) and needed to investigate these by actually using them... and then reporting on them...
There were already some useful posts on the use of iPhones which have been building up over the last year or so since the 3G version of the phone was introduced.
Teachers using iPhones
Noel Jenkins posted an interesting thought on his DIGITAL GEOGRAPHY blog giving his thoughts - he hadn't got an iPhone at the time, but has now.
He has put it to good use with his QR CODE FIELDWORK work: WELLINGTON STORIES.
Had the pleasure of seeing Noel present this work down in Somerset at the end of last year.
Ollie Bray had already posted a series of posts on iPhone in education, originally posted back in 2009
Post 1 of 5 had information on an app called MIND MAKER: a mind mapping app
Post 2 of 5 had a post on TRACK ME app, which uses the GPS capability of the iPhone
Post 3 of 5 on iGLOW (which had a useful tip for adding a new ICON on a screen)
Post 3.5 of 5 on a SEISMOMETER app (which I downloaded)
Post 4 of 5 had information on Geography Fieldwork apps
Post 5 of 5 had information on an app called EARTHSCAPE
I also asked my PLN via Twitter, and got some recommendations. for apps.
Some of the websites which I use regularly also have iPhone apps, so I checked those out as well: FLICKR is my photo sharing APP of choice, and I also downloaded COOL IRIS for viewing them. Also the ANIMOTO app for watching videos I've produced, such as the movie for "a different view", and also Rain Today. 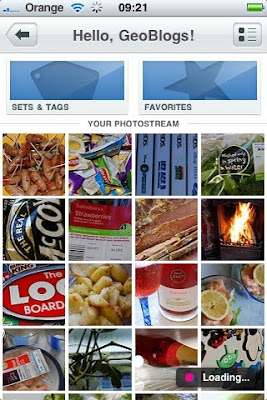 Image by Alan Parkinson
I also started a new iPHONE GEOGRAPHY GROUP on the GA Ning.
Here's the first page of the APPS I have so far. Got a 2nd page underway... 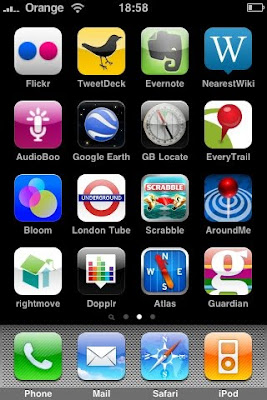 There are also some excellent features as part of the phone itself:
CAMERA and VIDEO CAMERA - obviously useful for story telling and fieldwork...
COMPASS - map orientation etc.
NOTES - no more clipboards
MAPS (using the built-in GPS) - endless potential here...
iTUNES and the iPOD settings for music and video and podcasts (including educational podcasts)
CLOCK: choose the WORLD CLOCK and add a range of cities that you are studying (quicker than the ones up on the wall...)
Also came across George Burgess's GCSE GEOGRAPHY revision app: GEOREV.
Might also check out the CLINOMETER, the GPS Cardinal, the RULER PHONE app, a Swiss Climate Change walk app, GEOTagging, We can take you there etc.
Got the BUMP app too - if you meet up, then feel free to BUMP me... Might get a chance at BETT in a couple of weeks time...
OK, so my iPhone adventure is underway...
Please let me know what your favourite 'educational'/geographical apps are...
Will be posting more on how I use my iPhone in geographical education during 2010
There are plenty of 'cultural' apps too of course...
Apps iPhone