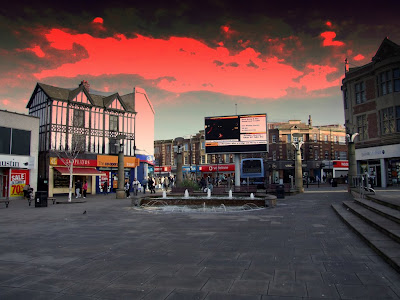 Image by Flickr user abooth202 under Creative Commons license
An interesting article in Friday's TES on a plan by Stephen Heppell to open up a school in Rotherham: my home town.
The school is, interestingly, going to be located in an empty department store in the town centre...
Stephen Heppell suggests that the layout of shops is more suited to modern teaching approaches than classrooms, and avoided the idea of "cells and bells". Similar schemes are already in operation in other countries, including the US and New Zealand.
A quote that struck a chord:
"Rotherham's a nice place, but when you walk through it, it's quite sad because whole streets are boarded up. When Burger King had gone there was a sign in the window saying 'Nothing of value left in these premises' - and I tried to imagine what had ever been there of value..."
This was suggested as being a useful use of the freehold for shops: if it's handed over for a few year's the building will be maintained and heated.
Another phrase that was used in the article is one I used at a few events recently: the 'Dick Turpin' model of teaching: "stand and deliver"....
I like the idea of changing the relationship between the former shop and the town centre, and locating a school in that place is going to offer lots of potential for the students to become urban explorers.
There is also another article here (with thanks to Twitter @Rothbiz) which mentions the "Meanwhile Project"
This sounds a little like the Empty Shops project in Worthing which my colleague David Rogers is involved with for Mission : Explore
Rotherham Stephen Heppell