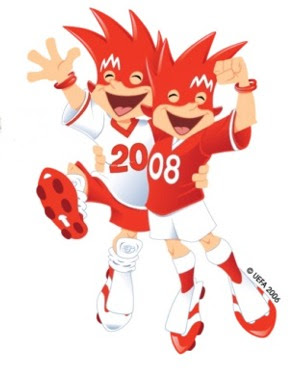 Interesting that as none of the UK teams have qualified for this tournament (it's Football by the way) the BBC and other broadcasters are making a lot of the fact that we have pockets of people from different countries living in the UK. There has been a push to support Poland by certain retailers, who are keen to sell products as they will miss out on the bonanza that occured in 2006. The cost could be as much as £2 billion in lost sales.

Some local towns have links with certain places.
The TIMES had a very useful article on Saturday looking at why some retailers are supporting certain countries:

Two years ago the World Cup in Germany helped Tesco to sell more than half a million St George’s flags, 400,000 footballs and 50,000 two-pint glasses in the shape of the tournament’s trophy.

This summer the supermarket is again draping its shelves in red and white: it is backing Poland.

Tesco has brought in extra supplies of Polish snacks and beer at 150 stores in areas with large Polish communities such as Slough, Hammersmith and Glasgow.

“There are three good reasons to support Poland,” a Tesco spokesman said. “They’ve contributed a lot to our economy, they’re underdogs, and they’re in the same group as the old enemy - Germany.”

THETFORD has a large Portuguese community.

Using BBC's BORN ABROAD site, can you suggest which country these retailers should be supporting ?

Also check out the excellent mapping produced by Danny Dorling and co at Sheffield University on their SASI site. There is also the excellent HUMAN GEOGRAPHY OF THE UK site.

Add a comment below - who are you supporting and why ?

Also an interesting article on Liverpool's CAPITAL OF CULTURE status and how it is affecting the city.