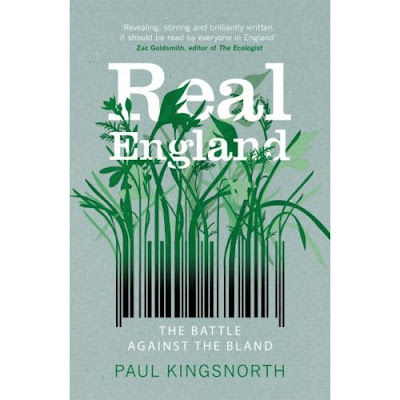 Called "Real England" by Paul Kingsnorth, it's on my TO BUY list...

We see the signs around us every day: the chain cafes and mobile phone outlets that dominate our high streets; the disappearance of knobbly carrots from our supermarket shelves; and, the headlines about yet another traditional industry going to the wall. For the first time, here is a book that makes the connection between these isolated, incremental, local changes and the bigger picture of a nation whose identity is being eroded. As he travels around the country meeting farmers, fishermen, and the inhabitants of Chinatown, Paul Kingsnorth will refract the kind of conversations that are taking place in country pubs and corner shops across the land - while reminding us that these quintessentially English institutions may soon cease to exist.

There is also a REAL ENGLAND blog, and you can read Paul's JOURNALISM and other writings on his website.

Has links to a number of relevant sites for us such as:

Here's a section which shows the relevance for our CULTURAL GEOGRAPHY unit. It was taken from a short extract in the Daily Mail a few days ago:

I discovered that the country I love is disappearing, its culture and character being wiped out.

Those in favour of globalisation argue it is a good thing for us to cast off our narrow, parochial past. Our communities are no longer geographical, they say, but communities of interest. Barriers are broken down by mass media and technology. Rootless, we gain freedom. Placeless, we belong everywhere.

This is nonsense. Placelessness and rootlessness do not create contentment, but despair.

Ask a tribal family whose land has been stolen for a logging concession. Ask an alienated 20-something working in a call centre in any of the world's mega-cities. Ask a pensioner who no longer understands the country she lives in.

All around us, we can see the steamroller flattening out our lives. This street market is closing down, that corner shop disappearing. People feel something is wrong, but they just don't know how to stop it.

They moan to each other in pubs and write letters to local newspapers. But if they bother to complain, they are fobbed off. It is patronisingly explained to them that these are small, insignificant local matters, of no import in the grand scheme of things.

They must think about wider issues such as economic growth or the War on Terror. If they persist, they are called "Luddites" or "nimbys".

The subtext is that no-one has the right to defend the place where they belong. We should have better things to do with our time.

Well, I believe there are few better things to do. This matters — a lot.

And, though it's unfashionable to say so in polite company, I've realised that it is England rather than that political construct, Britain, that matters to me.

Not because I'm a jingoist who think it's better than everywhere else. Not because I don't like foreigners or have a visceral desperation to win the World Cup. Simply because it is my country, the place I was born and grew up in and where I belong.

I know its landscapes and history and feel connected to both. I couldn't write about Scotland or Wales in the same way, because I am not part of them and they are not part of me. For better or for worse, I am English.

But we are a confused people these days. Recently, a Scottish nationalist was telling me how successful the Scots have been in creating a renewed sense of national identity since devolution.

It puzzled him, he said, that the English couldn't do the same. "Why can't the English talk about their identity or culture?" he asked.

I didn't know what to say, because I don't understand it either. The English, perhaps uniquely among European nations, are becoming almost a de-cultured people.

From our high street shops to the vocabulary we use, we are becoming a cheap and nasty imitation of the worst of consumer U.S.

We have lost sight of who we are and where we have come from. We can't sing our own folk songs or, increasingly, cook our own national foods. We sneer at morris dancers while we sip our skinny lattes.

The English — or the intellectual classes, at any rate — have long been renowned for this kind of rootless shoulder shrugging. George Orwell was railing against it 60 years ago. Taking "their cookery from Paris and their opinions from Moscow", he wrote, the average Left-wing intellectual "has always felt there is something slightly disgraceful in being an Englishman and that it is a duty to snigger at every English institution, from horse racing to suet puddings".

Not much has changed (though suet puddings are making a comeback in gastropubs). Mention Englishness to intellectuals today and you can still count the seconds before they start on the horrors of Britain's imperial past.

They are much happier hymning the virtues of ethnic minority communities — communities that, ironically, draw strength from their strong sense of cultural identity.

Discussions — let alone, God forbid, celebrations — of English identity are regarded with immediate suspicion, while those of virtually any other community on Earth (except the U.S.) are welcomed as positive displays of ethnic diversity.

"Multiculturalism" often seems to involve the celebration of every culture in Britain except the largest one — English culture.

This self-denial has had two dangerous consequences. One is that the Far Right has been able to colonise Englishness, conflate it with whiteness and make us all even more nervous about discussing it.

Paul also tackles the DISAPPEARANCE OF THE ENGLISH PUB

The LOSS OF ENGLISH APPLES

Read it and ADD A COMMENT BELOW so that I know that you have !
Multicultural Britain Paul Kingsnorth Real Britain