Las Vegas - the "Up and Atom" City

There are a few decent programmes on the telly. 'The IT Crowd' and 'QI' are on at the same time on Friday.
This week's QI introduced me to an interesting fact about the history of Las Vegas.
I use Las Vegas with my Year 13 geographers (hi gang !) as an example of a post-industrial city. It has an interesting history, which is explored in some exam materials from 2005 that I use.

THIS WEBSITE is rather great...
It has a useful tour of the city of Las Vegas, and has a cool FLASH map. 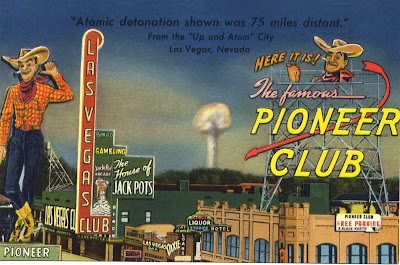 This is an interesting variation on tourism.
There is an ATOMIC TOURISM website for people interested in seeing the sites...
Las Vegas has an atomic testing MUSEUM.

Of course a few decades later were the "downwinders" - see this Wikipedia article for starters..

One of the more famous (alleged) casualties of testing in Utah was John Wayne.
He was famous for classic John Ford westerns, including "The Seekers" - filmed in Monument Valley (cue nice butte joke!) and 'True Grit'...