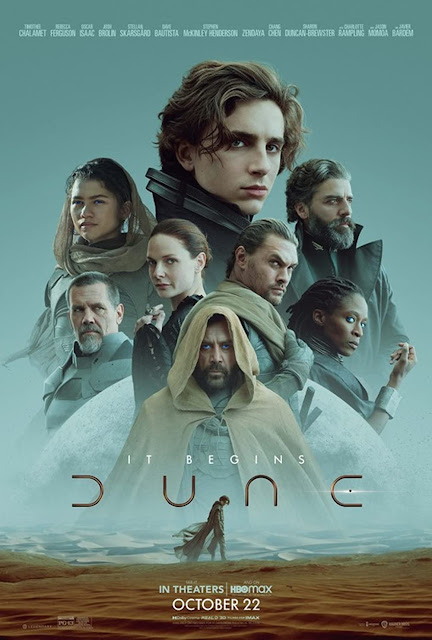 I read 'Dune' by Frank Herbert for the first time over 40 years ago, and also read its sequels. It's a remarkable and dense book with plenty of political intrigue. The setting is the planet of Arakis, where a hallucinogenic drug called 'Spice' can be found in the desert sands. This is needed to enable interstellar flight, and a series of guilds and Houses controls power within the Imperium and fights between each other.There's an allegory here for the way that a planet's environment can be affected by the desire to mine a precious resource, and how greenery is sacrificed, but the indigenous people fight a rearguard action against large incoming Houses (corporations).

This guest essay from New York Times has some background on Herbert's relationship with an indigenous person during his youth which may have influenced his thinking, and the plot of the book.

The film also does a sensible job of covering the first part of the book, and setting up a second film very well. The landscape of Dune is beautifully shot, and there are some real set piece scenes involving the sandworms - Shai Hulud - and the sand breaking like water on the rocks.

There are some issues around the role of female characters in the book of course, and Herbert was influenced by environmental issues around 'Silent Spring' and others. Villeneuve has succeeded in filming the unfilmable (another excellent New York Times piece) and this research piece.

An environmental fable, a parable of the oil economy, a critique of colonialism, a warning against putting your faith in charismatic leaders, “Dune” tells the story of Paul Atreides, an aristocratic teenager who travels to a distant land; joins with a desert people, the Fremen; becomes their messiah; and leads them into revolt against their colonial oppressors. Paul’s story recalls “Lawrence of Arabia” (Herbert was influenced by T.E. Lawrence), and “Lawrence” came to mind as I watched “Dune.” Each movie is a character-driven geopolitical epic, each was filmed in Jordan’s Wadi Rum and each is a spectacularly beautiful cinematic ode to the desert.