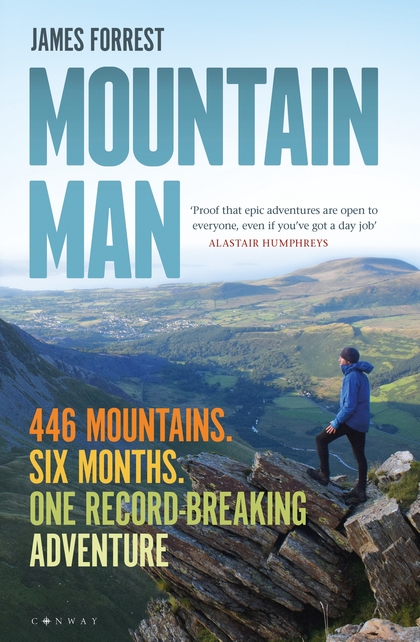 There are many books already on the groaning shelves of the GeoLibrary about mountains: from the book that propelled Robert MacFarlane into the public eye: 'Mountains of the Mind', to Joe Simpson's daring adventures on, and below Siula Grande in Peru. There are the Appalachians, as walked by Bill Bryson, and the peaks conquered by Mark Beaumont as he cycled the Americas.


These books have been joined by a new one, which is set purely within the confines of England and Wales.
It has been written by James Forrest, who is a fellow Ordnance Survey GetOutside Champion, and describes a challenge that James set himself to conquer all 446 mountains in England and Wales. They are known as the Nuttalls, and are defined as 'peaks above 2000 feet (609.6m) in height'.

James set himself a time challenge as well: six months to reach the summits of each of the peaks, and during one of the wettest periods in recent years this was not going to be easy.

He had to fit the travels around his part time work, which was partly a reason for leaving Scotland out of it - a lot of time is spent travelling to some of the remoter Munros, and James was keen to get his mission completed quickly, and also against some financial constraints, and then he moved house during that time as well.

James travlled solo and unsupported on his trips, so the book also goes into the logistics and organisation which had to take place even before James could lace up his boots, and the long hours of sleeping in cars, hitch-hiking and generally trespassing in order to reach some of the summits. He had moments of self-doubt, of dark humour and of pure elation.

James is a former newspaper reporter, and he has an obvious knack of drawing out some nice observations from the people he meets, and writes with good humour about the various deprivations he faced while reaching some of the more remote summits.In this book, he is some respects interviewing the mountains, but also asking big questions of himself - how far can he push himself?

At the back of the book there is a useful list of suggested kit for those who may want to plan their own adventure, and the spirit of Al Humphreys is present: adventures are not just for those with money and time, we can all find something to challenge ourselves if we sacrifice other things, and turn our minds to our goals.
One piece of kit that James made heavy use of was his OS Maps App subscription, to go alongside the more traditional paper maps. This, coupled with his rationed Netflix viewing must have tested his phone's battery to the limit.

There are plenty more mountains out there to conquer, and I am sure that James is already planning his next adventure.
As often with books like this, I flicked first to Peaks I knew well. A quick totting up suggests I've climbed about 50 or so of the peaks listed. I remember our teacher getting us lost on Kinder Scout (it's 636m high which is more than I expected), a wonderful evening on Blencathra being strafed by swifts (or swallows) and an airy scramble up Moel Siabod. A lovely read, and would make a good beach book for the coming summer holidays.

For another review by another GetOutside Champion: Glyn Dodwell, go here.