October 08, 2018
When I first started teaching back in the 1980s (I know), a key case study for environmental change, and also the management of water resources, was the decline in the Aral Sea. I had an old VHS tape which followed the tale of the sea's shrinking, with details of the canning factories which were closed, and the ships which were left stranded in the desert that consumed the area. Nick Middleton later visited during his 'Going to Extremes' series, which we also used to show (and there is a matching book also)
He visits Voz Island, which is contaminated due to its location where salt has been exposed at the surface as the sea evaporated....

A Global Oneness project resource explores the latest ideas relating to the Aral Sea too, and there are some useful resources here.
Images by Taylor Weidman are used in this resource.

The tourism aspects of the Aral Sea were picked up in a recent Guardian article too, which shows the possible rehabilitation of this environment, which also could be used as a venue for a music festival. This sounds like an interesting opportunity for the region, and moves away from the idea of dark or disaster tourism.
Interesting description of the area though:
Visitors to Moynaq, a forlorn Uzbek town, are usually disaster tourists coming to gawk at the desolation of the apocalyptic landscape, where the carcasses of ships rot on sand once covered by the world’s fourth-largest lake.

You can see the changing Aral in NASA images from the Earthshots website.
A quick check on ESRI StoryMaps library reveals this map too.

Also in the recent (and rather wonderful) William Atkins book on deserts, there are some alternative perspectives on the area, with a fantastic chapter on the Aral Sea, which is really worth reading.
The area could be turning round, and there are hopes that the sea may begin to grow again in the future.

And the Aral Sea came back to TV tonight with its inclusion in Stacy Dooley's Fast Fashion documentary. 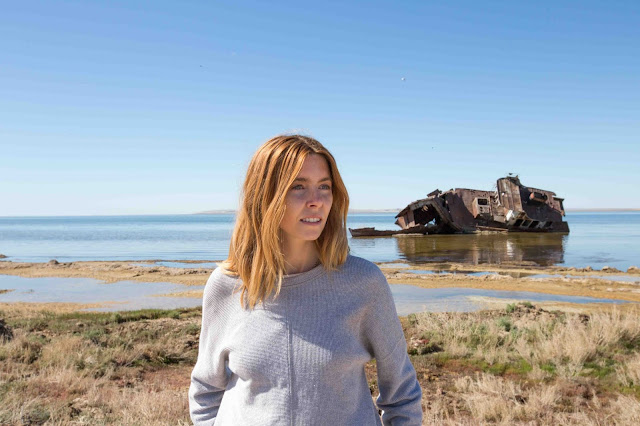 Stacey Dooley travels the world to uncover the hidden costs of the addiction to fast fashion. She sees for herself how toxic chemicals released by the garment industry pollute waterways that millions of people rely on. She witnesses the former Aral Sea, once one of the largest bodies of fresh water, now reduced almost entirely to dust.
These are shocking discoveries likely to make you think twice about whether you really need those new clothes.

A lot of people on Twitter were amazed that an entire sea could disappear just to provide cotton. Just ask a geographer if you want to know more...