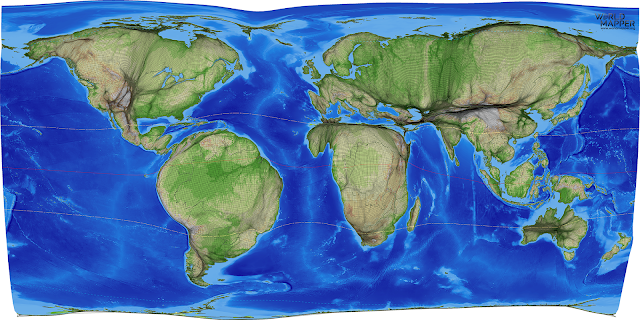 The new Worldmapper website was launched at the GA Conference following months of investment of their own time and money from Ben Hennig and Tina Gotthardt. It is used in classrooms around the country (and beyond) and would be great to support them at this time. I'm amazed no geospatial company hasn't wanted to be involved in ensuring this remains free for all educators to use forever. The new mapping makes this an even more useful site, but as someone who used to run a website knows (albeit rather less useful), bandwidth and server costs aren't free...
Let's see if as many geography teachers as possible can donate the price of a pint, or a skinny latte (or more) to help payback for all the maps we've used over the years.

As it says on the Worldmapper site:

The new website is proving more popular than ever before. Unfortunately this has led to repeated server outages in recent days since the fresh new design and functionalities have considerably increased demands on the webserver that is hosting the Worldmapper homepage.With this GoFundMe campaign we want to raise the necessary funds that pay towards the running costs for an upgraded server that we would like to switch to, to allow more reliability of Worldmapper while it keeps growing, and maintain the archive as well.


We need your #help! Our webserver is frequently reaching its limits causing #Worldmapper to be offline at regular intervals. Support us with a small donation that helps us to upgrade our server capacities. Every little helps! https://t.co/Booh8YULRt @gofundme #GoFundMe #maps pic.twitter.com/poINpaLjwp
— Worldmapper (@worldmapper) April 24, 2018


All maps shared under CC license.