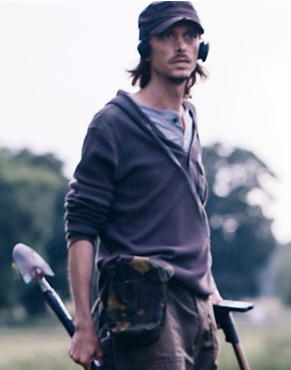 Detectorists is one of the best things that has been on the telly over the last few years.
Now there is an opportunity to prepare a paper connected with it for the RGS-IBG Annual Conference in 2018.

The focus is on Landscapes, and there is no shortage of recent reading I've done that would connect with that, such as David Matless's book 'Landscape and Englishness' and recent work by Rebecca Solnit and Lauret Savoy.

I'm almost tempted to put something together as a contribution, but haven't much experience in academic conferences, other than the GTE.

The conference strand is described as follows by Innes Keighren:

Where “Detectorists” is distinct from most situation comedies is that much of the action takes place outdoors, in the fields and meadows where the programme’s protagonists pursue their hobby. Both aesthetically and thematically, landscape dominates “Detectorists”. Filmed on location in Framlingham, Suffolk—standing in for Essex, and the fictional town of Danebury—the visual palate of the programme enfolds a non-human supporting cast of insects, birds, plants, and trees, and variously echoes the landscape paintings of Thomas Gainsborough and George Shaw, and the cinematic vision of Peter Hall’s “Akenfield” (1974).
Landscape is, also, the focus of the protagonists’ preoccupations; it is variously walked, surveyed, sensed, gazed upon, read, and dug.
Landscape is where the programme’s characters seek solitude, find companionship, and navigate the sometimes dramatic intrusions from ‘the rude world’.
Landscape reveals the past while concealing the prospect of future discovery.
Cultural Geography Cultural Landscapes Detectorists Landscapes