10 years of the Edexcel Geography Ning 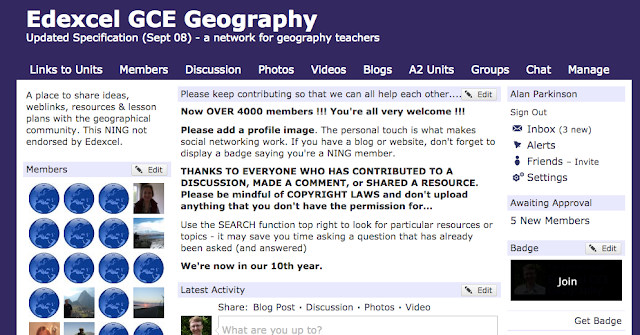 Over ten years ago, while working as a Head of Geography at a school in King's Lynn, I came across the Ning platform, short for Networking. It offered a free (at the time) platform which had the features of all sorts of other sites in one:
- bulletin board for discussions
- chat room
- hosting of image galleries
- hosting of videos, with embed codes
- numerous groups with membership
- profile pages

Documents could be attached to discussions and this allowed for a community to develop, which could chat, share ideas and join groups around sub-themes.
I built a Ning to support 6th form students and it worked well - in fact I did my first teachmeet presentation back in 2008 on Nings.

In June 2007, faced with the changes that were coming at 'A' level, we opted for Edexcel as the most forward thinking of the new specifications. They were introducing new ideas for the time, including ideas such as Rebranding Places, and a unit on Cultural Geography. We were teaching the OCR Pilot GCSE Geography at the time, and so the Edexcel spec was the best follow on for a forward thinking and creative department like the one I led at the time. I had a background in supporting teachers through my GeographyPages website, which was still getting many thousand of visitors a day. I didn't want to have to resource and prepare a whole new 'A' level course by myself over the summer, so I started a NING called New Edexcel Geog.

The NING is now, I've just realised, 10 years old!
It's been a decade of teachers helping other teachers.
Thanks to Jon Wolton for funding the NING for the last 6 years or so.
There are over 4300 members now.

And thanks to anyone who has ever shared a resource, or joined a discussion.