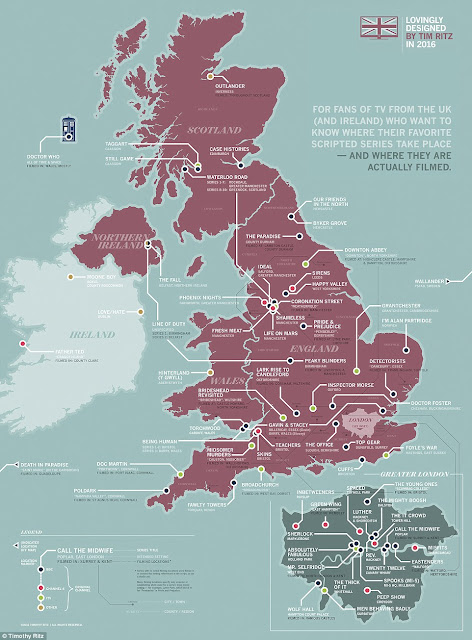 This map, created by Tim Ritz has been doing the rounds of social media this weekend, and now been picked up by a few newspapers too, who are sharing the map which shows where a large number of TV series have been filmed.
This is an area that I haven't yet developed, but has been on my list of 'units to develop at some point' for some time.
It would be interesting to try to work out which programmes have been filmed close to where you live. I live close to the Norfolk coast and also Swaffham, so we have 'Alan Partridge' connections, and also the Stephen Fry series 'Kingdom'.
Ely Cathedral is also regularly used for filming, recently the new version of 'Macbeth' was filmed there and the Cathedral can be seen in the film's trailer.
Act as a location scout and work out a suitable location to film a number of key scenes in a new movie, and provide the context and some requirements - a good way to use StreetView imagery and mapping perhaps...

Image: Copyright Tim Ritz - you can buy copies of it in different sizes here too.

Good to see the Detectorists getting a mention too...
Cultural Geography Geography in Film Locations Mapping TV