June 05, 2013
Thanks to Rachel Bowles for the tipoff to a new site, written by the estimable Stephen Scoffham and Fran Martin.
It's called 'Frameworks for Intercultural Learning'. 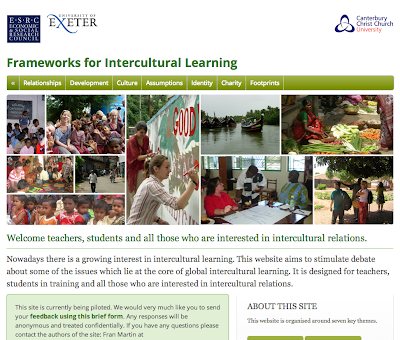 It's being piloted at the moment, so head over there and check it out.


Recognising our role as global citizens is an essential part of living in the twenty first century. Global challenges such as climate change, the loss of biodiversity and conflicts between social groups require global solutions.

Schools, universities and other educational institutions have a key role in developing critical and creative thinking about such issues, and intercultural learning is central to this process. However, to find new solutions to global problems we need to promote intercultural dialogue and go beyond the limitations of Western models of development.

This site draws on the findings from the ESRC funded Global Partnerships for Mutual Learning research in two different ways:

Our aim is to help you to think more deeply about how you interpret your inter-actions with people from a range of places and cultures. Although the website draws on thinking and research from both Western and Southern perspectives, we acknowledge that it is located within an Anglo-Saxon context and expressed through the medium of the English language.

A central notion is that the nature of the relationship between people of different cultures is at the core of ethical and worthwhile intercultural learning experiences.

There are tasks to complete, videos to watch and other elements to support teachers and students interested in exploring cultural geography a little more.
Cultural Geography Fran Martin Stephen Scoffham