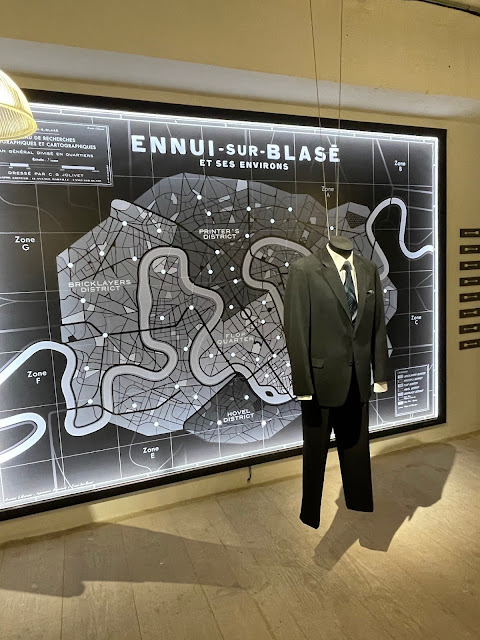 Some of you will be familiar with the films of Wes Anderson. They are meticulously made and composed, with each shot having a particular visual style and often a symmetry about them.

His latest film is called 'The French Dispatch'. I saw it on opening weekend.

There is a great deal of geographical interest here, from an early travelogue of the fictional city where the action takes place, to a later story involving the kidnapping of the son of the local Police inspector.

The weekend before last, I travelled down to London to have a fairly cultural weekend with my son with a film focus, and one of the things we took in was an expedition at 180 Strand of props from the film. We had been to a previous exhibition of props from the animated film 'Isle of Dogs' which Wes made, but this was on a whole other level... once again there was a themed restaurant / cafe that was serving food. The whole film was told as you moved through the expedition with large spaces filled with props, costumes, graphic design and recreations of the set. I took rather a lot of photos, particularly of the map related items.

I particularly liked this huge map which appears in a scene towards the end of the film, and would certainly have it on a wall in my house. Check my Flickr feed for some more images from the exhibition if you are interested.

A wonderful experience that has now closed - I presume moving on to another location.