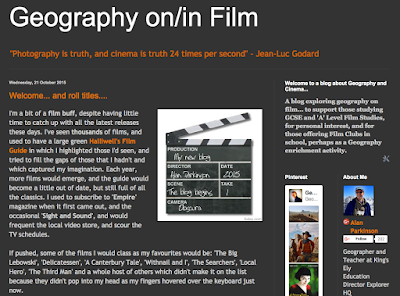 Every now and again, I start a new blog on a particular theme as an extra place to share specific
resources and ideas.
This new blog will share my ideas on geography in / on film....

I'll share memories of particular films from the past, preview films that are coming up, talk about films I've seen recently, and explore their geographical significance.
Geography is tied in with all films: they are set somewhere, and their narrative is driven by characters engaging with places, and their own interconnections.
Each image in a film has been carefully chosen, and may appear on screen for just a short time, but linger in the memory for a lot longer.

I'll explore film posters and the landscapes they show, cultural geography in films, how cities and the rural landscape are (re)presented in film, film soundtracks and the stories that the films were based on, or the new worlds that they open up. I'll explore how maps feature, and where films are located in specific locations.